We're closed for vacation until July 11 . Orders will be shipped when we return. Have a Happy 4th!! 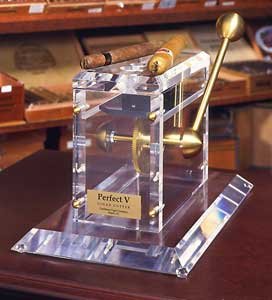 In the mid ‘90s, the cigar industry was booming. Stan Oster, owner of a small high quality acrylic
manufacturing firm founded in 1976, became intrigued with cigars when a client came to him and
asked him to create a desktop acrylic “V” cutter. He developed the designs and made prototypes
for this customer.  The sales for this novel cigar cutter were astounding.

Man on a Mission
Stan’s interest was piqued, so he decided to create a line of high quality acrylic humidors in which cigar
aficionados could show off their collections of fine cigars and store them in the perfect environment. At
that time, the most common method for humidification was floral foam contained (within a black plastic
box of some sort). No one paid attention to its appearance because it was a necessary evil and was not
seen inside an opaque wooden humidor, but inside his creation the humidifying device was visible. It
was also very difficult and messy to use.

Personal Quest
Stan went on a quest to find a humidification system that would work inside his clear humidor. He needed to create an attractive device which would function properly. At the time the primary method established for cigar humidification for fifty or more years had been a solution of 50% propylene glycol and 50% Water (PG 50/50). A method to control humidity was needed. It seemed obvious to use this time tested method to control humidity.

Stan also needed something to hold the liquid so that it wouldn’t drip on the cigars and not be ‘ugly”. Stan found a relatively inexpensive plastic material that absorbs liquid and holds onto it. He found a material being used to keep newly planted trees hydrated during early phases of growth.  He also found out that this class of material was being used to capture liquids in baby diapers. These crystals absorb many times their own weight in water and form a gel. He discovered that the crystals also swell as they absorb water in proportion to the amount of water they absorb (anyone who has played with a baby in a pool already knew that). As an added benefit they were visually appealing.

Development and Design
Stan felt he then needed a clear container to show off these crystals and hold them in place. A clear
plastic tube was the obvious choice being very familiar with acrylics.  He would be able to drill tiny holes
in the sidewalls of an acrylic tube and cap them on the ends to prevent leakage. These tiny holes in the
sidewalls would allow water vapor to pass thru and the crystals would hold the liquid back. However, he
still wanted to find a less expensive alternative to an acrylic fabrication. In a twist of fate, He was speaking
to a tubing manufacturer who told him that the tubes they manufactured wouldn’t work for Stan’s application.

They were, in fact, ‘bobby pin tubes’. When bobby pins go from a warm warehouse to an air conditioned
store, they ‘sweat’ and can therefore rust.  Water vapor passes through the walls of these tubes, so the
water contained inside the tube would eventually evaporate. Oster asked ‘Do you mean water vapor
passes through the walls but the liquid does not?”. The answer was affirmative. He had an epiphany;
here was a plastic tube that would allow humidification though its wall, but not allow liquid to pass.

The Eureka Moment
In a stroke of genius, he realized he had created a new concept for cigar humidification. A crystal that expands and contracts would give feedback to the user about how much liquid it contained- a tube that breathed though its walls but didn’t leak liquid. He applied for and was granted a patent in less than 1 year.  All of Stan’s prior 8 patents took 2 to 5 years and were much more difficult to obtain.  He knew this product was truly unique.

And thus, the DryMistat® humidification tube was born and an industry would be changed forever. Almost 20 years and two million tubes later, the rest, as they say, is history.